Circumcision is a simple surgical procedure that removes the foreskin – a sleeve of skin covering the tip of the penis. Although infancy is the ideal time for a circumcision, many adult men and teens seek circumcision for medical, health, sexual, cultural, religious or cosmetic reasons. However, a man does not need to have a medical reason to have a circumcision. Personal preference or social reasons are perfectly valid. In order to make an informed decision, he must carefully consider the benefits and risks. Before you view more information, you must confirm that you are currently 18 years old, or older, and that you understand that the following information is of an explicit nature.

I AM ABOVE 18 YEARS OLD - CONTINUE

I AM ABOVE 18 YEARS OLD - CONTINUE

Circumcision is a simple surgical procedure that removes the foreskin – a sleeve of skin covering the tip of the penis (Fig.1). Although infancy is the ideal time for a circumcision, many adult men and teens seek circumcision for medical, health, sexual, cultural, religious or cosmetic reasons. However, a man does not need to have a medical reason to have a circumcision. Personal preference or social reasons are perfectly valid. In order to make an informed decision, he must carefully consider the benefits and risks. Since the foreskin traps bacteria and other infectious agents, as well as accumulating malodorous smegma, its removal improves genital hygiene and reduces risk of diseases and other conditions over the lifetime of the man and his sexual partners. 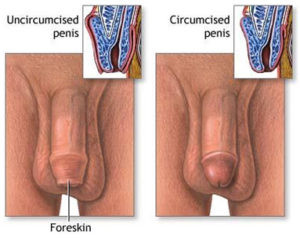 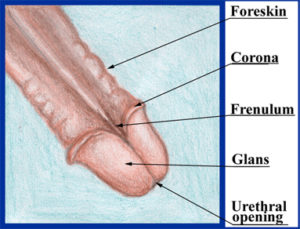 Figure 2: Anatomy of the penis.

Finally, sexual function and sensation is the same or better in circumcised men. The problem of overly tender sensitivity of the head of the penis experienced by many uncircumcised men is virtually eliminated

All surgery certainly involves some risk. However, circumcision is a very safe procedure with a complication rate of around 1%. Most complications are minor problems related to the wound and are self- limiting. Around 2-3% of men circumcised by experienced practitioners will have a minor complication such as bleeding or infection. Bleeding and infection are easily treated. Often patients may report what they perceive to be local infection; however, this is actually part of the normal healing process. The risk of serious injury is extremely rare. 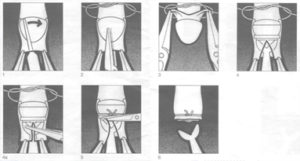 Firstly circumcision is not a cure for HIV. That is to say that it reduces the risk of acquiring the infection. Above all, circumcision is not a substitute for condoms.  Consequently, other means of protecting oneself against this virus remain essential. It is also important to note during the healing period following circumcision sexually active men may be at a higher risk of HIV infection.

Finally, circumcision confers a lifetime of medical benefits. As a result, many uncircumcised males are at greater risk of developing medical conditions leading to possible suffering and, in some extreme cases, death. In contrast, circumcision can reduce the risk of a number of these medical conditions. The surgical risk of circumcision in a modern setting is extremely low, while the long-term functional and cosmetic outcomes are generally excellent. Men’s Clinic International offers the service of performing the circumcision procedure at a cost of R1450 (inclusive of VAT) and includes a circumcision pack for post-operative care (medication and dressings). Further, contact 0860362867 for additional information. In addition, you can SMS “cut” to 32110 and a representative will contact you to arrange an appointment. Please find clinics offering this comprehensive service listed below:

An infant or baby is the very young offspring of humans. A newborn is an infant who is within hours, days, or up to a few weeks from birth

Smegma is described as a “cheesy substance”. Both females and males produce smegma. In males, smegma is produced and collects under the foreskin.

A catheter is a tube that can be inserted into a body cavity, duct, or vessel. Furthermore, catheters allow drainage, injection of fluids, or access by surgical instruments.

Diabetes mellitus, often simply referred to as diabetes is a group of metabolic diseases in which a person has high blood sugar, either because the body does not produce enough insulin, or because cells do not respond

Urinary tract infection (UTI) is a bacterial infection that affects any part of the urinary tract. The main cause is Escherichia coli. Although urine contains a variety of fluids, salts, and waste products, it does not usually have bacteria in it. When bacteria get into the bladder or kidney and multiply in the urine, they may cause a UTI

Penile cancer is a malignant growth. The skin or the penis tissues are home to this cancer.

Amputation is the removal of a body extremity by trauma or surgery.

Prostate cancer is a form of cancer that develops in the prostate. The prostate is a gland in the male reproductive system.

Balanitis is inflammation of the glans penis.

Thrush or candidiasis is a fungal infection of any of the Candida species (all yeasts). It is also known as a yeast infection.

Syphilis is a sexually transmitted disease as a result of the bacterium Treponema pallidum. The syphilis is almost always through sexual contact.

Chancroid is a sexually transmitted disease. Sexual contacts spreads this disease and as a result painful sores appear on the genitalia.

Chlamydia is a sexually transmitted infection as a result of the bacterium Chlamydia trachomatis.

An ectopic pregnancy is a complication of pregnancy as a result of the pregnancy implanting outside the uterine cavity.

A suture is a medical device used to hold body tissues together. This happens after an injury or surgery.

In conclusion, Mens Clinic International deals with any sexual problems that are related to Weak Erections, Early Ejaculation, Low Libido, STIs or Circumcision. Do get in touch with us to book a consultation with our professional doctors who specialise in Men’s Sexual Health.

Contact us now to find out more about Mens Clinic prices and circumcisions. Or click here to book an appointment with one of our friendly doctors in your area.

Introduction A Weak Erection (also know as impotence or erectile dysfunction) is not a disease, [...]